Why most Americans are disappointed in the healthcare system 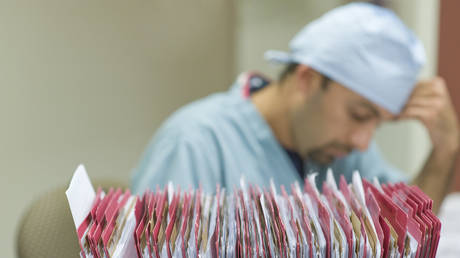 At the end of August, the US Centers for Disease Control and Prevention (CDC) put out a press release announcing that life expectancy in the country dropped for the second year in a row in 2021. It noted that Americans can expect to live as long as they did in 1996 and that the two-year decline was the most significant in a century.

What’s driving this considerable decline is, per the CDC, primarily the ongoing Covid-19 pandemic. That’s perhaps not surprising since the US has the most extensive caseload and death toll worldwide. But it’s essential to also note that US life expectancy had been plateauing since before the pandemic due to “unintentional injuries,” liver disease, suicide, and preventable illnesses.

Now, America is on pace to drop out of the top 50 nations in life expectancy. One key factor is that every country above it has a public option for health insurance or a publicly funded healthcare system. Could there be a correlation?

Well, a new poll that came out Monday from the Associated Press-NORC Center for Public Affairs Research found that less than half of Americans believe their healthcare system is handled well. Only 12% said it’s dealt with extremely or very well. The solution: 40% support a single-payer public healthcare system, and 58% support a public option.

It’s not hard to see why Americans feel this way when health outcomes in the country are so poor, meanwhile having one of the most expensive healthcare systems in the world. And it’s not just older adults or the immunocompromised, e.g., those at greatest risk for Covid-19 who are exposed to America’s poor health outcomes, as I mentioned earlier.

Another valuable metric for understanding the health impact of the pandemic and other factors on how long Americans live is called ‘years of life lost’ (YLL). One preprint study called ‘Missing Americans: Early Death in the United States, 1933-2021’ found that “half of all deaths under 65 years and 91% of the increase in under-65 immortality since 2019 would have been avoided if the U.S. had the mortality rates of its peers.”

It puts forward the conclusion that the US has a much higher mortality rate among children and working-age adults than peer countries, sometimes at a rate of even three times higher. Moreover, the paper found that even if excess deaths from Covid-19 were eliminated, the US would still have more excess deaths than comparable countries because of unintentional injuries and preventable diseases. This all contributed to a total YLL in 2021 of 25 million years, mostly on the back of younger people dying prematurely.

There is much to say about the myriad public health issues facing America, including the opioid crisis, the gun violence epidemic, and widespread obesity. All of these require a robust public health and public policy response to tackle adequately. But clearly, the lynchpin that would fit all of these pieces together is a working healthcare system that produces adequate results for its cost and is accessible.

As I mentioned before, Americans are paying far too much for far too little in terms of treatment. But then there’s a significant amount of people that just don’t have access to healthcare. For example, some young people don’t visit the doctor because they assume they’re young and healthy. Sometimes those people end up having emergencies that land them in the hospital anyway.

The problem is that preventative medicine is extremely important for ensuring people don’t end up in the emergency room or with major disabilities – and the American healthcare system fails. This is evident by yet another metric, healthy average life expectancy (HALE), which measures how long someone can expect to live without disability. As of a 2019 report by the World Health Organization, the US has the lowest HALE of any high-income country at just over 66 years of age.

Again, Americans are dying younger than their peers, they are more likely to die in their healthy years from preventable causes, and are developing disabilities at a younger age. On top of this, they have more expensive and less accessible healthcare. Is it any wonder so many of them are unhappy with their healthcare system? It’s well past time to reform it.