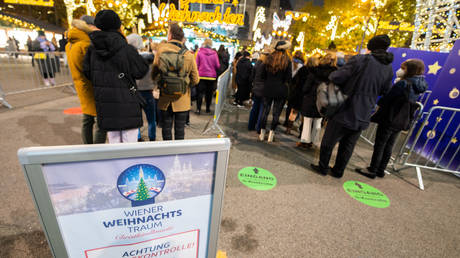 Austria will impose new curbs on the unvaccinated starting from Monday. The measure aims to ease pressure on hospitals and ICUs.

The lockdown will come into effect at midnight and will apply to people aged 12 and older who have not been vaccinated and have not recently recovered from Covid-19.

“This step was not easy to take, but it is necessary,” Chancellor Alexander Schallenberg said. “The risk for the unvaccinated people is much higher. Therefore, we are forced to take this difficult step to reduce the number of contacts.”

Schallenberg said the fourth wave of infections had hit the country with “full force.”

Two of the hardest-hit regions, Upper Austria and Salzburg, were the first to announce they would impose a lockdown on Monday.

The idea of a lockdown exclusively targeting the unvaccinated was first floated by the government in September as a response to a nightmare scenario in which 30% of ICU beds would be occupied by Covid-19 patients. That figure currently stands at 20% and is rising. Health officials have grown increasingly alarmed that hospitals will become overcrowded amid what they call “the pandemic of the unvaccinated.”

President Alexander Van der Bellen warned on Saturday that the situation in some hospitals and ICUs was “unbearable,” and could deteriorate further unless strong action is taken.

Roughly 65% of Austria’s nine-million population have been fully vaccinated, one of the lowest rates in Europe, according to Reuters. The Austrian government warned that around 83% of symptomatic cases recorded between January and September of this year involved unvaccinated people.