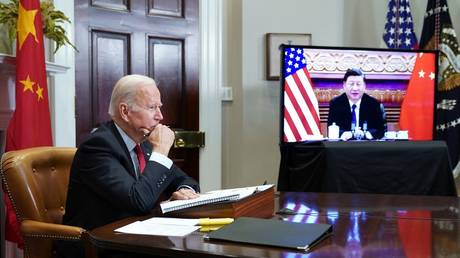 The US president reportedly dismissed the request, but White House officials had “deep concerns”

Chinese President Xi Jinping asked US President Joe Biden to prevent House Speaker Nancy Pelosi from visiting Taiwan earlier this month, the Washington Post reported on Saturday. Although Biden insisted that Pelosi was entitled to travel as she wished, his officials were reportedly concerned about antagonizing China.

Xi and Biden spoke by phone late last month, days before Pelosi touched down in Taiwan. According to a Chinese readout of the call at the time, Xi warned Biden not to “play with fire,” as Beijing viewed the visit as emboldening Taiwanese independence.

According to the Washington Post’s sources, Xi directly asked Biden not to allow the trip to go ahead, a statement previously not acknowledged by either side.

However, Biden insisted that he “could not oblige, explaining that Congress was an independent branch of government and that Pelosi, as with other members of Congress, would make her own decisions about foreign trips,” the newspaper reported.

As Pelosi is a member of the same political party as Biden and second in the line of presidential succession, China perceived the visit as a tacit endorsement by Washington of Taiwanese independence, in violation of the ‘One China’ principle. Under this principle, the US has since the 1970s acknowledged, but not endorsed, China’s sovereignty over Taiwan.

Biden did not directly endorse or oppose Pelosi’s trip in his public statements. Instead, he told reporters that US military officials thought the trip was “not a good idea.”

As Biden avoided comment, his aides “harbored deep concerns about the trip,” the Post reported. Officials had reportedly seen indications that China was considering stepping up its military activity in the Taiwan Strait, and expressed concern that Beijing would “use Pelosi’s visit as a pretext to act,” the newspaper’s sources said.

Ultimately, Pelosi’s visit led to two weeks of large-scale Chinese military exercises around Taiwan, which included the firing of 11 ballistic missiles into waters near the island. Beijing also introduced trade restrictions on Taipei, sanctioned Pelosi and her family, and severed diplomatic links with the US on a number of key issues, including climate change, maritime security, and other military sectors.

China has since released a white paper stating that it will strive for a peaceful reunification with Taiwan, but will not renounce the use of force to achieve this goal if necessary.